The HBLS Harris Engineering Bipod is exactly what you’ve been searching for if you want the impeccable mix of affordability and efficiency. It’s very light but strong, and it’ll work with virtually any rifle configuration.

Furthermore, the spring-loaded legs are simple to operate and allow users to utilize this Harris bipod on difficult terrain easily. Nevertheless, because this bipod doesn’t feature any mounting adapters, and therefore, you’ll have to pay additional money if you really need something more than just a swivel stud.

The expanded range of 9″ to 13″ is longer than most of the other bipods, creating a practical solution. In addition, it’s a tough bipod that would survive year on year as well as a number of shots. Let’s look at the features and pros and cons of the Harris Engineering HBLS Bipod Review. 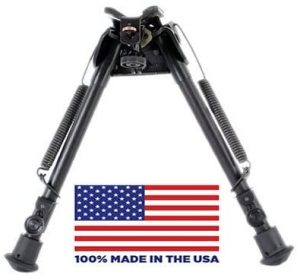 The Harris S-L2 Bipod is one of the lightweight series of bipods (as the “L” indicates). It features a height adjustability range of 9″ to 13″ and standard adjustable spring return legs.

The flexibility to swivel to either side on this model is a bonus advantage that allows it to be leveled on rough terrain.

It is one of the most prominent bipods in the Harris bipod line because of its compactness and the excellent quality of the components that are utilized in the construction.

This model’s leg length falls in the middle of the height spectrum, making it ideal for both supines and seated shooting. The weight of this type, which would be about 11 oz, is perhaps the most remarkable characteristic, and it is recognized for both its lightweight and compact size.

The HBRS, which also has conventional legs, is a similar bipod in the Harris line. In comparison to the HBRS, the HBLS is indeed longer as well as lighter. Despite its low weight, it offers a strong shooting platform that is suited for high-powered rifles. For simple transport, the legs fold parallel to the barrel, and also the legs may also be mounted to point forward and backward.

The bipod is quick to set up, and it will fasten to the bolt-action as well as single-shot rifles’ quick-detachable sling swivel stud. An adapter can be purchased optionally if the rifle does not provide a factory-fitted Quick Detach stud.

The Swivel bipods may now be upgraded with an “S” Lock (seen to the left), which is very well worth the additional cost. This is a lever that takes the place of the tension adjustment knob and makes it so much easier to secure them. All you need to do is switch the lever from entirely tilting to completely locked into place.

The bipod, like other Harris Engineering Bipods, is produced entirely in the United States.